Probably the most tragic and heartwarming story in the history of the NBA is the story of Maurice Stokes and Jack Twyman.

Twyman joined the Rochester Royals in 1955 out of the University of Cincinnati, and became one of the best scorers in the league in the late '50's, peaking at 31 points a game in 1959-60.  He was also popular with the fans, with the Royals moving to Cincinnati in 1960, and after the conclusion of his playing career Twyman became a color analyst on the ABC broadcasts of NBA games.

Stokes, on the other had, was the first African-American star in the newly-integrated league, joining the Royals from St. Francis University the same season as Twyman.  Already an accomplished rebounder his rookie season in the league, Skokes was also a fine passer and scorer, making the trip to the All-Star Game each of his first three years.

Then in the final game of the 1957-58 season against Minneapolis, Stokes feel awkwardly, striking his head on the floor and seemed to lose consciousness.  Three days later during the first playoff game of his career, in a first round matchup at Detroit, Stokes appeared sluggish, and on the plane back to Cincinnati he passed out.  Upon receiving medical attention when the plane landed in Cincinnati, they discovered he had contracted post-traumatic encephalitis, which left him paralyzed.

While Stokes' family lived in Pittsburgh, workman's compensation laws forced him to remain in Cinncinnati to receive his medical care.  It was that that Twyman, who had not been especially close to Stokes prior to the accident, decided he would become Stokes' guardian.  Twyman then began to work relentlessly to raise money for Stokes' care, and to help him with his rehabilitation.  One of the money-raising events that was organized was the annual Maurice Stokes Benefit Game at Kutsher's Hotel in Monticello, New York.  Many of the league's players (including Wilt Chamberlain) made the trip to Kutsher's each summer to play in the game, and the fundraising event continues to raise money for former players in need in the form of the Maurice Stokes/Wilt Chamberlain Pro-Am Golf Tournament.

Although the damage to his motor control center was considerable, years of therapy allowed Stokes some mobility in his limbs and limited ability to communicate verbally.  While his body had been stricken by his condition, his mind remained sharp until his death from a heart attack at age 36 in 1970.

In 2004 Stokes was inducted into the Basketball Hall of Fame and his friend Jack Twyman represented him at the induction ceremony. 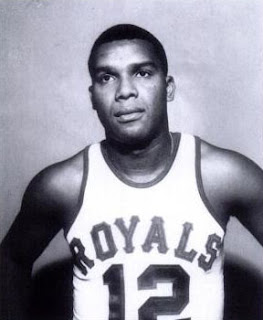 Posted by Robert Bradley at 5:36 PM