When I first became aware of NBA basketball the team that caught my eye was the 1971-72 Lakers.  Now it just seem unimaginable that I was a Lakers fan, even at that age.

But of course this wasn't just any team it had Wilt and Jerry West on it.  I didn't know a thing about the game itself, but I knew these guys were stars.  Throw in Jim McMillian, Gail Goodrich and Happy Hairston and you had the greatest team in NBA history (in my young estimation).

At this point Wilt was legendary.  His scoring accomplishments with the Warriors and 76ers earlier in his career were Herculean, but by this point he was concentrating on defense and rebounding.  West on the other hand was at the top of his game.  Driven by a history of team failures in the World Championship Series against Boston, West averaged nearly 26 points and 10 assists a night, and provided his usual stellar defense.  West's scoring was matched by his backcourt partner Goodrich, whot the Lakers had lost in the 1968 expansion draft to Phoenix before re-acquiring him in exchange for Mel Counts.  McMillian was a second year man from Columbia who provided frontcourt scoring and the veteran Hairston helped with the rebounding.  Orchestrating it all was former Boston Celtics star and ABA coach Bill Sharman.

The most remarkable thing about the '71-72 Lakers was their unprecedented 33-game winning streak of course.  Not only did it cover two months and include a perfect 20-0 December, it helped the Lakers to amass a league-record 69 wins and their first NBA titles since moving to Los Angeles from Minneapolis in 1960.  Elgin Baylor wasn't quite as fortunate as West however.  While Baylor suffered through even more postseason disappointments than West, the health of his knees prevented him from making it through the season and his November 5 retirement was the day the streak began.

After dispatching the Bulls (Bob Love, Chet Walker, Jerry Sloan) and Bucks (Lew Alcindor, Oscar Robertson, Bob Dandridge) in the first two rounds of the playoffs, the Lakers exacted their revenge on the New York Knicks (who had defeated them in seven games in the 1970 Championship Series), defeating them in five games.

New York would turn the tables on the Lakers in 1972-73 and then Chamberlain would leave to coach in the ABA, but for a season a young soon-to-be NBA fanatic was caught up in the phenomenon which was the 1971-72 Lakers. 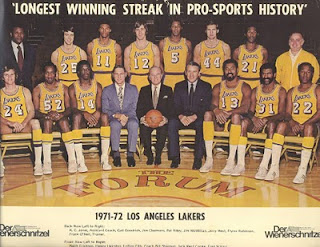 Posted by Robert Bradley at 6:57 PM