The Brilliant (but Brief) Careers of David Thompson and Bill Walton.

In the late '70s there were probably no two more exciting players entering their prime than Bill Walton and David Thompson.  Walton was the key to the success of the UCLA dynasty of the early '70s, the first overall selection by Portland in 1974 and the star of the Portland championship team of 1976-77 - his ability to score was secondary to his defensive, passing and rebounding prowess.

Thompson on the other hand was the high-scoring and high-flying guard of the Denver Nuggets.  At North Carolina State he led his team to the national championship in 1974, breaking UCLA's stranglehold on the title and being named Player of the Year.  Selected by the Atlanta Hawks first overall in 1975, Thompson signed with Denver of the ABA and played on the Nuggets team which lost to the New York Nets in the league's final championship series.

In Portland, Walton's Blazers steamrolled the rest of the league over the first 60 games the 1977-78 season, winning 50 games and losing 10 before Walton suffered a broken foot.  He returned for the playoffs against Seattle, managing to appear in only two games before re-injuring the foot.  Walton's relationship with the Blazers' quickly soured as he sat out the 1978-79 season and demanded a trade, with his free agency in 1979 looming over the Blazers franchise.

Meanwhile, Thompson continued to flourish in Denver, with his scoring average peaking at 27.2 points in 1977-78 after a 73-point game on the final day of the season.  Thompson lost the scoring title to George Gervin however when Gervin managed a 63-point game later that evening to win the crown by a fraction of a point.  In the offseason Thompson was rewarded with pro basketball's richest contract, signing a five-year, $3.75 million contract.  Thompson's incredible accent became a downward spiral soon after due to substance abuse issues, and he was traded to Seattle in 1982 for Bill Hanzlik and a first-round pick.  The decent continued as Thompson entered a treatment program and then sat out the beginning of the 1983-84 season as a holdout before finally agreeing to a contract midway through the season.  An injured knee in a much-ballyhooed incident at Studio 54 in March, 1984 effectively ended Thompson's career as a 1985 comeback failed as he was released by the Sonic.  A public intoxication arrest scared off any other teams that might have been interested in signing him and Thompson was finished at 31.

Thompson's stint as the game's highest-paid player didn't last long as Walton signed a seven-year, $5.6 million contract with his hometown San Diego Clippers in 1979.  NBA Commissioner's excessive compensation award to Portland for the free agent signing and Walton's continuing foot problems devestated the San Diego franchise as he managed to play only 14 games in 1979-80 and missed the 1980-81 and 1982-83 season in their entirety.  After three more seasons with the Clippers with limited availability, Walton was traded to Boston in 1985, where he squeezed out one more complete season as a substitute for the Celtics, winning the NBA Sixth Man Award as the team won the championship.  Then, after being limited to 10 games in 1986-87 by ankle problems, Walton attempted a to return in 1990 but ultimately retired after a scant 468 regular season games due to his injuries (which would lead to his having his ankles surgically fused). 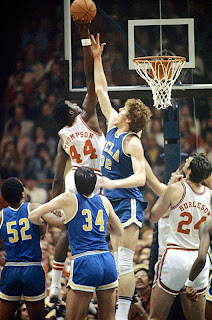